Oracle meet IBM at the LJCOpenConference

The LJC Open Conference last Saturday was the best! We had 75 people and a packed agenda with talks ranging from the "Java Roadmap" through to "The Diabolical Developer". Martijn Verburg, captured below, was the diabolical developer: 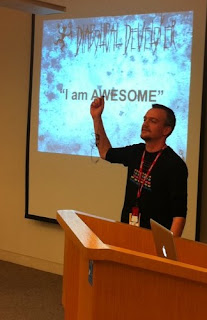 And he was, in fact, awesome...and very diabolical.

Steve Elliot from Oracle and Steve Poole IBM answered questions on their future together in Java: 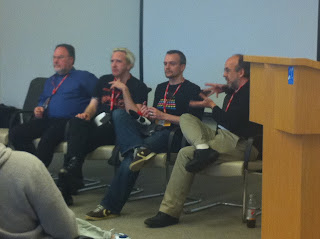 It's still early days and the LJC organisers clearly thought it was prudent to separate the Steves with Martijn and Ben - although I'm not sure if they were worried about them getting too friendly or the reverse. Nice touch to have coordinated the names though - if you want become a contribute to the OpenJDK being called 'Steve' looks like a good first step.

Posted by Zoe Slattery at 05:06 No comments:

Igor - have you watered the brains today, Igor?

In his keynote at ApacheCon 2010, Dana Blankenhorn noticed 'middle aged men dressed like college students' and then went on to liken us to the Knights of the Round Table.

I won't dispute the Camelot analogy - but I do want to take issue with  'middle aged men'. Middled aged is probably justifiable on average but it ignores the fact that there were a reasonable percentage of both old and young - and - no kidding - some of us are even female.

The youth were brought in by a wonderful organisation that I knew little about till earlier year - the Apache TAC . The TAC enables great programmers early in their career who are  unlikely to be able to get employers to sponsor their travel and even more unlikely to be able to pay for themselves get a chance to come along and participate. This is great for them but it's also very necessary for the future of the ASF a good dose of wild youth counters the tendency of these organisations to turn crumbly and nostalgic.

After the conference a few of us (including Igor of the blog title)  had to hang out in Atlanta for the weekend and ended up in Blind Willies, Atlanta's finest blues bar. We, Igor and I, danced till the early hours to the music of House Rocker Johnson. So in future I would like to suggest another question on the TAC form:
Anyone who can't commit (without a reasonable excuse) should be consigned to the 'encroaching middle age bucket' and discarded.

By the way - for those of you who are almost certainly too young to recognise it - the title quote is a reference to 'The Monster Mash' from the 1969 Bonzo Dog album 'Tadpoles'.  I like the idea that younger delegates might inject a bit of life into the proceedings and don't intend to extend the analogy any further than that :-)
Posted by Zoe Slattery at 03:35 No comments:

So that was my first ApacheCon - if you don't count the one in Dublin at which I drank far too much Guiness and decided on a career change which took me on a slightly circuitous route through  PHP  and back to Apache again.

It was a pretty amazing conference all round - great to meet Lin Sun, Jarek Gawor, Kevan Miller and others from IBM. Also great to meet new Apache people  - and catch up with the ones I already knew.

AWESOME that IBM is a gold sponsor of the ASF - well done whoever made that happen!

As usual I learned a lot about technology - Kevan had a nice slide explaining which other Apache projects are used in Geronimo - I had no idea.  I do like this philosophy - no need to re-invent wheels when there are Apache projects which provide spokes, hubs, rims and tyres. 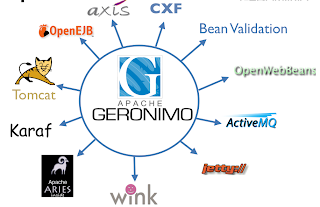 Posted by Zoe Slattery at 01:25 No comments: