A couple of weeks ago I was helping my mother move some furniture and found a newspaper from Saturday December 23rd 1967 which had been used as drawer lining. I skimmed through it and eventually found the "Women's Appointments" section. 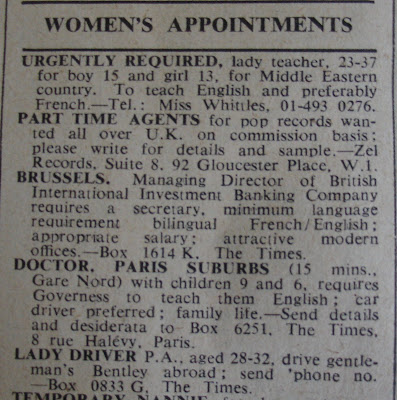 Of course you would never see anything like this in the UK now, not since the sex discrimination act in 1975. The weird thing is that I would not have seen anything odd about this section in a newspaper in 1967. In fact, I applied for a job in 1973 as a lab technician for a chemical company and was not even mildly annoyed when they wrote back and said the job was only available to men. It makes me wonder how much I accept now without thinking too much about it.

Thirty five years after the act there are clearly still things wrong in the UK. For example, why do so few girls go into computer science? For any teenage girl with a flair for maths it should be such an obvious career choice. My daughter obtained her degree in computer science last year and is very happily working for Assanka in London. However, I suspect that she might never have followed that route if I hadn't worked for IBM. It's also probably true that I wouldn't have pursued a career in science if my mother had not been a doctor. How long will it take to push through enough role models to even things out? Generations?

It's not all bad though, my son is a dancer and currently touring with Matthew Bourne's Swan Lake. I cannot imagine what would have happened in the the 1960s if a child of intellectual middle class parents had insisted that all he wanted to do was dance.
Posted by Zoe Slattery at 00:55 No comments: